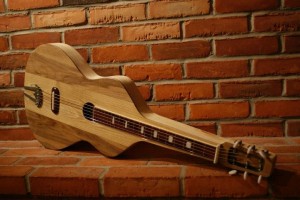 When I was in college I met and Made friends with a guy named Bernie Larsen. Bernie Had moved to the desolate upper peninsula of Michigan to be closer to his dad, but he had the great past of playing with some fantastic musicians including David Lindley and El-Rayo-X, and later Melissa Etheridge. I first met him when my band, Dred Scott, went to record in his studio. Long story short, I ended up working in the studio as a session engineer and playing in Bernie’s Reggae/Soul band Cry On Cue.

Through these experiences I learned a couple things that I carry with me to this day, that old strings sometimes have a sound of their own. Instruments from garage sales can be gold, and that  Danelectro guitars deserve to get mentioned in the same sentence as Fender and Gibson. I’ll could get into the Danelectro thing, but I’ll save that for another day. For now let’s just say that Danelectros where built to be affordable, out of the the cheapest materials that could be had, clear soft pine and masonite.

The first guitar I built, I built like a Danlectro, but since I made it using a Fender tele neck, I made the body shaped like a telecaster and called it a Danocaster. It was fun but I couldn’t help feeling like I had just ripped off Danelectro and Fender and did it in such a way that the resulting guitar wasn’t as good as either.

I started thinking about how i could apply the low tech/cost approach to guitars that Danelectro stood for without copying someone else, how could I give it mor of my own spin and vibe. At the same time, I had recently  gotten a K&S Weissenborn-style lap guitar and was really into lap style playing. At some point it dawned on me that Danelectro had never made a lap guitar, and Weissenborn had never made an electric. So I built one. The problem was that I didn’t have the skills or tools at that point and it came out kind of uneven and generally messed up. I thought to myself that it was “ghetto” and it stuck. It became the Ghettoborn. (Ghetto-Weissenborn).

As I’ve continued on and gotten better, the instruments really aren’t so “ghetto” anymore, but the same construction principles apply and you always get a little bit of that magic Danelectro hollow body tone even if I don’t use masonite for the tops and backs.

Examples can be found in the galleries here or my facebook page. Who knows where this goes next, Ghettosaz? Ghettoud? The possibilities are pretty far-ranging and I’m excited to see where it goes.